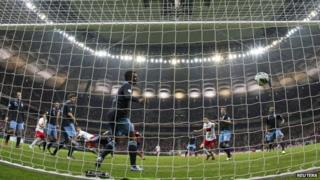 England have drawn against Poland in their World Cup qualifying match on Wednesday in Warsaw.

Wayne Rooney gave England the lead in the first half, but Poland's Kamil Glik equalised after the break.

Manager Roy Hodgson admits England were not at their best, but said: "Sometimes you just have to be satisfied to come away with something."

England are still ahead of Montenegro by a point in their group, but having played one more game.

Captain Steven Gerrard says England only have themselves to blame for the draw. He said: "I don't think we played to our level."

A soggy pitch caused by heavy rain on Tuesday night forced the match to be postponed to Wednesday.