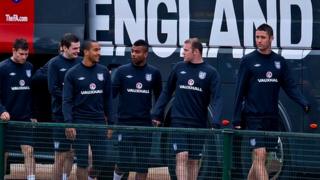 Football bosses have released a new list of rules to be followed by the England team. The FA code of conduct includes 33 do's and dont's for players.

The six-page booklet outlines the responsibilities and behaviour expected of each player picked to play for England.

The new code bans players from using Twitter or Facebook the day before a game, gives the FA power to choose the team captain if necessary, and there are even rules about when players are allowed to listen to headphones.