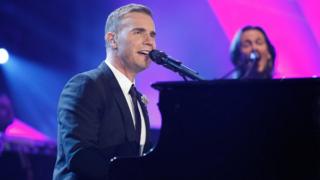 Gary Barlow has announced that he'll be hitting the road with a UK tour.

The 15-date tour will begin in Bournemouth next month.

The X Factor judge says the gigs will be scheduled around his commitments on the show.

As part of the tour, he'll play two hometown shows in Manchester at the city's Apollo and Bridgewater Hall.

It'll be his first solo tour in 13 years.