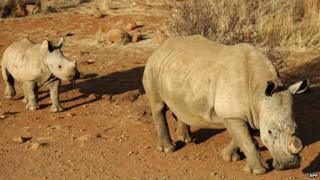 There's been a big rise in the number of rhinos being illegally killed in South Africa.

Poachers have killed 455 rhinos so far this year, which is already more than the total number of the animals killed last year.

Wildlife experts think the animals are being targeted because their horns, which are used in traditional medicine all over Asia.