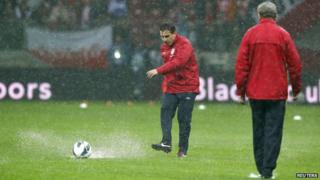 Heavy downpours meant the pitch in Warsaw was too wet for the teams to play on.

But the announcement wasn't made to fans until an hour after the scheduled kick-off time.

The match is now re-scheduled to be played on Wednesday but officials aren't sure the pitch will be dry in time.

England manager Roy Hodgson said; "It's going to need a lot of attention if it's going to be playable tomorrow afternoon."

Wales suffered a knock to their World Cup hopes after losing 2-0 away to Croatia.

Scotland held off Belgium until the second half of their game but failed to keep up their defence, eventually losing 2-0.

Northern Ireland narrowly missed out on a surprise win against Portugal, they were 1-0 up until a late equaliser from Helder Postiga brought the scores equal.