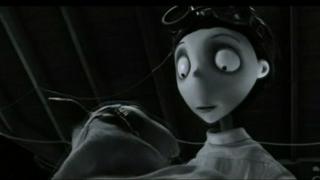 Frankenweenie is a black and white stop-motion animation about a kid who invents a machine that can bring his dead dog back to life.

It's been made by famous director Tim Burton, who's known for making movies about crazy characters who invent things.

So to celebrate the film coming out we asked Newsround viewers to send in ideas for wacky inventions for Joe to show to Tim and the cast.

You can see what they thought of your ideas here. BUT FIRST - find out what Joe thought of the film.

Schoolboy Victor Frankenstien is a scientific genius. When he's not playing with his beloved dog Sparky, he's busy making machines and filming little movies about monsters. One day Sparky runs into the street and is hit by a car and dies.

The main character, Victor, is played by an up and coming child actor called Charlie Tahan. His most recent big film was Charlie St Cloud which he was in alongside Zac Efron. None of the other voice actors are that famous but Victor's Mum and Weird Girl (yep, that's an actual character!) are played by a big favourite of mine called Catherine O'Hara who is in my best Christmas film ever - Home Alone!

Hit! Don't let the black and white style put you off, because it looks so good that after about 5mins you don't even miss the colour. Like all of Tim Burton's movies, it's full of really weird and interesting characters like Weird Girl who has a pet cat called Mr Whiskers which predicts things with his poo! Some of the characters are a bit pointless though like Victor's next door neighbour who is around throughout the film but doesn't really do much at all.

I reckon the film can be split into two with the first half being much better than the second. The first half is really funny as we get to know all the characters and there are some really funny jokes in it - especially if you like old horror movies. The second half is still good but not as much fun as it is mainly a lot of action without many jokes. However there is a really funny one involving a giant turtle and a hamster which had me in stitches!

Overall I would say it's definitely worth a watch with lots of unforgettable characters and some silly comedy.