New planet discovered by amateurs who have named it PH1 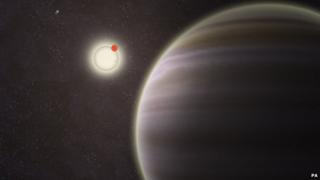 This is PH1, a brand new planet five thousand light years away from Earth.

It's been discovered by two amateur astronomers who are part of a group called planet hunters.

They watch the brightness of stars and can see when they become dimmer which suggests planets are moving in front of them.

The planet is six times bigger than earth and really rare because it's lit by four different suns.

Their discovery of PH1 was confirmed by professional astronomers using a massive telescope on Mauna Kea, Hawaii.

"It's fascinating to try and imagine what it would be like to visit a planet with four suns in its sky, but this new world is confusing astronomers - it's not at all clear how it formed in such a busy environment."

The planet has been named PH1 after the planet hunters website.