Felix Baumgartner travelled faster than the speed of sound when he jumped from the edge of space back down to earth.

He was going more than 800 miles an hour after he leapt from 24 miles about the ground.

He had a few problems on the way down when he span out of control and the visor on his helmet fogged up.

But he managed to get back in control and landed safely in the desert in New Mexico, America. 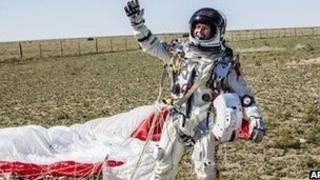 He travelled up to the edge of the atmosphere wearing in a special suit and carried by a giant balloon.

He then jumped out of the capsule and it took him about nine minutes to fall back to the ground.

He couldn't see his equipment because his mask had steamed up so had to guess when to pull the cord to release his parachute.

It went off a bit early but meant he was safe and drifted back to earth and landed on his feet.

It was a really risky jump and people have died trying to do it before.

Afterwards he said he wouldn't do it again.

"It's way more difficult than anything I've done so far and I think I am done."