Get your Young Sports Personality nominations in 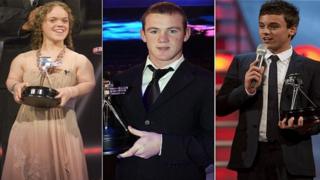 The Young Sports Personality award is one of the biggest honours in the business.

But now it's time for someone new to have their name etched on to the trophy.

And the BBC want you to decide who should be nominated for the the top prize.

A panel of judges, including Newsround's Ore and Blue Peter's Helen Skelton, will then finalise a shortlist of 10 from all the nominations received.

The panel will then meet again to select the final three, who will be invited to attend the live BBC Sports Personality of the Year 2012 show.

So get your thinking caps on and send in your nominations.

When you've filled in the form you can either email it to sports.personality@bbc.co.uk or post it to: Young SPOTY 2012, Fourth Floor, Quay House, Media City UK, Salford, M50 2QH.

All nominations must be received by Monday 19 November, 2012.

The award is made to the outstanding young sports person of the year, who was aged 16 or under on 1 January 2012, selected from nominations made to the BBC and by sports governing bodies via the Youth Sport Trust, and fulfil some other terms and conditions - which can be read here.