The Chinese turtle that wees in its mouth 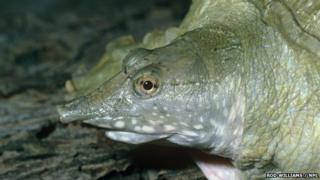 Scientists in Singapore have discovered a Chinese turtle that wees through its mouth.

The soft shelled turtle species called Pelodiscus sinensis survives by breathing air into its lungs, but stays under water for hours at a time.

It's had scientists in a spin for years who have wondered how it can survive being underwater so long without air.

And when they tested the water they found it was using its mouth to pass urine, rather than its kidneys.

The turtle species is found in swampy water and is native to East Asia.

And at times submerge their heads into pools of water for up to 100 minutes.