Chat: How should we remember 100 years since World War I? 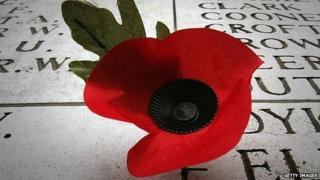 How should we remember 100 years since the start of World War I?

Prime Minister David Cameron is announcing on Thursday his plans on how to commemorate the anniversary in two years' time.

World War I lasted from 1914 to 1918 and was called the "war to end all wars". The scale of destruction, and the loss of human life, was like no other war before it.

How should we remember World War I?

We asked you how YOU think we should commemorate the First World War. Here's a few of your comments.

"I think a plane should drop one poppy for each of our soldiers who died in WWI."

"I think we should have a moment of silence and wear red poppies."

"I think that everyone should wear red and a poppy as well as go to a memorial and remember those who died for us. If they hadn't who knows what we'd all be like? What language would we speak? Would we even be alive?"

"I think not only should we wear poppies but we should have a big bell and have a few seconds to think about the war."

"We should have a minute of silence to remember those and the Queen should make some sort of speech."

"I think that we should learn more about WW1 and WW2 in school."

"I think we should have a day off school and have a big parade in red and black to respect those amazing people who risked their lives during World War I."

"I am in a local cub pack and on the Sunday closest to the 11th November [Armistice Day], we go to the local memorial and sing hymns and say speeches to commemorate those who died for us."

"I think it's a very special day to remember because all those innocent people died for us."

"I think we should wear red and have a poppy on."

"I think we should wear red and black clothes to show our respect to the people who died in World War I."

Tell us your most amazing wildlife spotting moment

What are the new emojis all about?