One Direction fastest-selling US hit by non-US act 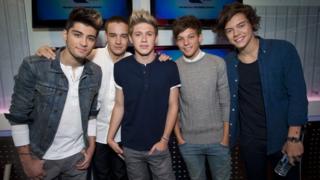 The Americans just can't get enough of One Direction - the boys have scored the fastest-selling song ever by a non-US act!

Live While We're Young sold a whopping 341,000 downloads in its first week.

Niall said: "We're so happy with the success of the single in the USA. We can't wait for everyone to hear our new album."

It's gone straight to number one in the digital charts there, and number three in the main Billboard Hot 100 chart.

That also gives them the highest ever first week debut on the Hot 100 chart by a British group!

The Hot 100 chart combines sales, radio play and streaming. Singles generally enter low and climb, instead of going straight in near the top!