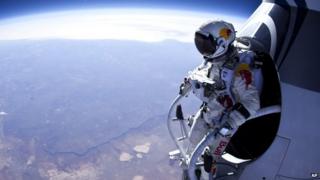 An Austrian skydiver's attempt to break the speed of sound by jumping from a balloon 23 miles above the Earth has been postponed.

High winds meant Felix Baumgartner's jump had to be postponed on Tuesday afternoon and later on that night.

His team plan have postponed the jump until Wednesday, weather permitting.

The skydiver will travel at more than 700 miles an hour and it will take him just 10 minutes to reach the ground.

The record breaking stunt is taking place over the desert in Roswell, New Mexico in the United States.

The 43-year-old adventurer became famous for jumping off skyscrapers.

It's very dangerous stunt, two people have died trying to break the record in the past.

He jumped from a balloon around 19 miles above the Earth way back in August 1960.