Should there be a limit on how much TV you can watch? 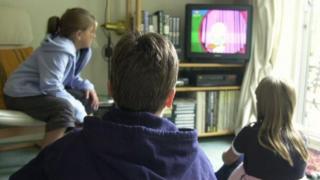 How much time do you spend watching TV or playing on the computer?

Well a new study reckons that too many kids are having too much screen time.

The report found that by the time a child is seven they could have spent around a year of their life looking at TV and computer screens.

Some experts think that if you're between 7 and 12-years-old you should limit yourself to an hour a day to help your brain develop better.

We asked if you thought there should be a limit on how much screen time you have and if children spend too much time watching TV and playing on computers?

Here are a selection of the comments you sent in...

"TV shouldn't be banned because TV is sometimes helpful for your brain because you might learn things."

"I think we should watch a set amount of TV and use computers every day for maybe one hour."

"I think TV and computers can be very useful because sometimes when you're watching them you can learn something."

"You should watch TV and computers sometimes because reading can effect your eyes."

"We should watch less TV because watching too much on screens can be bad for your eyes. However, I do like watching TV!"

"I think this is nonsense because TV ROCKS!!"

"You should be allowed to watch TV for as long as you want because it's up to you, not anyone else if you want to damage your eyes."

"Computers can be used for staying in touch with relatives, getting information and learning things like that."

"I think we should watch TV because it helps you learn but if you watch too much it can hurt your eyes."

"I think we do watch too much TV but it keeps us entertained and educated when we're not at school."

"I think kids can watch as much TV as they like."

"I really do like watching TV and playing on the computer but my mum only lets me watch on a weekend or in the holidays. I live in Bangladesh and there aren't that many good shows to watch."

"I think that people should have 3 hours of screen time per day because then they can have one hour per session of screen time. Then they will have just the right amount of time on and off the computer or television."

"I think that there shouldn't be a limit, but you should at least know when to stop."

"Five hours is my maximum."

"I think there should be a limit because if you watch TV too much your eyes hurt and get headaches and then you might have to wear glasses."

"This is just over-exaggerated nonsense. I go on the computer every day for about four hours, and I'm still in the top sets for maths, English and science at school. Also, we frequently use computers and watch TV shows at school during lessons."

"I think a limit is a very good idea. There are so many other activities that are also fun and good for you like reading, drawing, cycling and writing!"

"I think children in-between 7 to 12-years-old should get more time to watch TV."

"I think that children aged between 7-12 should get at least 30 minutes in the morning when you get up and 30 minutes after school."

"I don't watch any TV because we have devices like an iPad and a computer and I have better things to do - but I can't resist watching football sometimes."

"We think that children should spend less than one hour watching TV a day, and only use the computer for homework. We both can't watch TV, we only can watch TV on weekends because we have too much homework."

"I do not watch a lot of TV because I am always looking after my pony. I watch Coronation Street most of the time."

"I don't think this is right because TV is really good. If you watch the right things then it should be okay!"

"I think that kids shouldn't watch too much TV, since it's bad for you but sometimes you do it for a good reason like homework or watching Newsround."

I don't think it is a good idea because a lot of the programmes teach you stuff, like Horrible Histories, on CBBC. Even my mum watches them!"

"I love going on the computer and watching TV. I have been watching TV since I was a baby."

"NO NO NO NO!!! We should have quite a lot of time watching TV and going on computers! In TV lots of things have educational links and real-life situations! What if you needed to do homework on the computer?"

"I think people should get up, get outside, and get moving."

"I think it depends what it is for because sometimes you could be using the computer for school or homework, or using the TV for watching information."

"I watch TV a lot it, probably about ten hours a day, I watch Newsround a lot too."

"I think you should have a set time to be playing and the time for TV."

"I think there should be a limit of 1 hour and a half a day. I like it but when I stop watching everyone else is still inside and won't come and play outside."

"This is absolute rubbish. I love my computer and don't think it has anything to do with brain development."

"I think children should have 1 hour on the computer and 2 hours watching TV."

"I think there should be a limit because it does help your brain and you will not get headaches from looking at a screen for to long."

"I don't think it's fair that there is a limit on how much TV we watch or how long we play on a computer for. If we play educational games then you won't need a limit. Also, some adults who are suggesting these limits probably watched loads of TV as kids."