Rocket to take supplies to Space Station takes off 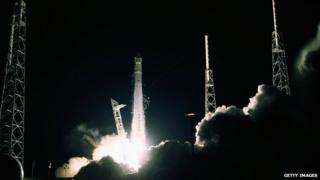 A rocket that's going to take supplies to the International Space Station has taken off.

The falcon rocket lifted off from Florida in America carrying food, clothes and spare parts to 6 astronauts living onboard the space station.

What makes it special, is it has been made by a private company, rather than America's space agency NASA.

There will be 11 more missions after this one - to keep the Space Station stocked up and working properly.

The International Space Station has been floating around the Earth's orbit for 14 years.

It took 13 years to build and cost around one billion dollars. 6 astronauts live onboard, so it needs to be constantly looked after and they need food and supplies.

The American government have decided that they can't afford to run missions to look after it - so they now pay a company to do it for them.

Attached to the falcon rocket is a dragon cargo capsule that will split off and attach to the Space Station.

It will come back to Earth at the end of the month, when it will be loaded with broken machinery from the station and experiments that have been taking place there.