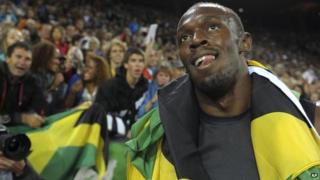 You might think he'd be bored of winning so many gold medals - but Usain Bolt says he plans to defend his titles at the next Olympics.

People thought he might change events to the 400m or the long jump - but the Lightning Bolt says he's still focused on sprinting.

He also says that next year he plans to run faster than ever before!