What do mountain rescue do? Hero Squad profile 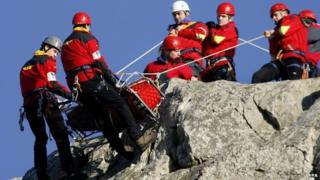 The brand new CBBC series Hero Squad takes six children and sends them on a tough training programme alongside real-life lifesavers - from coastguards and lifeboat workers to firefighters and the Royal Air Force search and rescue.

One of them is mountain rescue. Here's a quick guide to who they are and what they do.

Mountain rescue teams around the UK carry out about 1500 rescue missions a year.

They work alone or alongside other teams like police and firefighters but unlike them, mountain rescue is not funded by the government.

They're a charity, which means all the people who carry out the rescues are volunteers and money constantly has to be raised to pay for the equipment and vehicles they need.

Volunteers work from mountain rescue bases all around the UK but don't stay there all day and night. Instead, they are on call 24 hours a day and are alerted by phone if needed. That person then alerts the rest of the team and they meet at the base to gather equipment.

People who volunteer for mountain rescue teams are professionally trained and usually live where they volunteer, using their specialist knowledge of the area to carry out rescues.

Mountain rescue are often called out to help walkers and climbers who might be lost, injured or in any danger.

They also carry out river rescues and work with police in urban searches.

What equipment do they use?