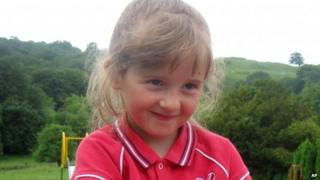 A special service has been held for missing five-year-old girl April Jones in the town where she disappeared.

Hundreds of people took part in a procession through Machynlleth, mid-Wales, on Sunday morning.

That was followed by a church service of hymns, prayers and readings, led by the Bishop of Bangor, the Right Reverend Andrew John.

He praised the community for coming together.

The bishop said: "We've had donations from people in Texas, we've had emails from people in South Africa, from New Zealand, who've been astonished at the way in which you've drawn together."

Police charged a 46-year-old man with murder on Saturday.

Mark Bridger was arrested by police on Tuesday, the day after April vanished.

Specialist search teams have been continuing the hunt for April.