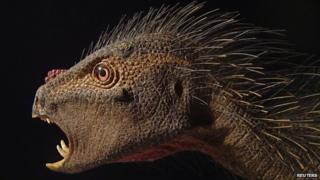 A new kind of dinosaur has been identified that is part parrot, part vampire bat and part porcupine.

The dinosaur had a parrot-like beak, porcupine-like spikes and sharp fangs, which is unusual because they also think it was a vegetarian!

Professor Paul Sereno, from the University of Chicago, actually first discovered the creature way back in 1983.

But he got distracted by other work and didn't get round to writing about it until now!