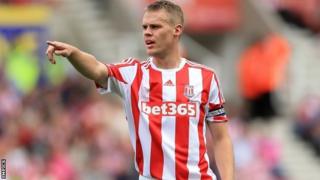 Stoke City defender Ryan Shawcross is the surprise name in the latest England squad, with Tottenham's Aaron Lennon also recalled for the first time since the 2010 World Cup.

The duo have been called up for the World Cup qualifiers against San Marino and Poland later this month.

Shawcross has never played for England, despite being called up to the squad under Fabio Capello in 2010.

Celtic goalkeeper Fraser Forster has also been picked for the first time.

Up front Wayne Rooney and Andy Carroll are both back in after missing England's games against Moldova and Ukraine.

Shawcross fills the gap in the squad created by John Terry's retirement. He was recently offered the chance to play for Wales, having gone to school there, but turned it down to pursue his England ambitions.