One Direction hit back at 'banned questions' claim 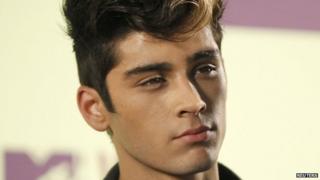 One Direction have hit back at claims they banned questions during a radio interview with Zayn.

A DJ in Canada aired a recording where One Direction's press person can be heard listing 12 things he wasn't allowed to ask.

But the band have called it a "complete misunderstanding" in a Twitter statement released on Thursday.

It said: "A suggestion was merely made to try and make interviews more interesting for the fans."

The 'banned' list included "Which of you have girlfriends?" and "Anything X-Factor related".

The statement also said: "[The group] knew, via feedback, that the fans were requesting a wider range of subject matter in interviews.

"Questions relating to describing each band member, or referencing The X Factor, are certainly not out of bounds."

The boys are currently battling out for the number one spot in the UK charts. Read more about that here - One Direction vs Rihanna for No.1