A powerful rocket developed for a 1,000mph car called the Bloodhound is to be tested in Newquay, Cornwall.

The rocket engine is similar to the ones used in fighter jet typhoon planes.

The rocket will be attached to the ground and scientists will watch it being fired through a video feed.

It is being tested to make sure it is safe before it is put inside a car which will be used to try and break the land speed record of 763mph next year. 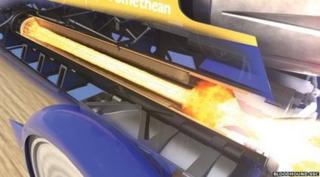 The car will use rocket and racing car technology and will be really noisy because it is so powerful.

"By the end of 2012, we will have test-fired the rocket, we will have the car going on to its wheels and we will be turning this into a running vehicle for 2013.

"We've done good ideas, we've done detailed design - this is now transition to reality. This is actually happening and we are going to have a car next year."