Great Barrier Reef loses half of its coral

Australia's Great Barrier Reef is disappearing, according to new research.

But scientists have found that than half of it has been destroyed in the past 27 years.

They think that a mixture of bad storms, rising sea temperatures and coral eating starfish is to blame. 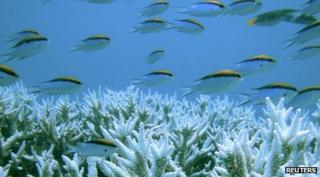 Researchers in Australia, who carried out the report, are worried that the coral cover could halve again by 2022 if things don't change.

Coral can recover from damage but it can take up to 20 years for it to get back to full health.

The team are going to try and stop the coral being eaten by crown-of-thorns starfish, who they think are responsible for destroying almost half of the reef.

Coral reefs are an important part of the marine ecosystem, they provide food and act as protection for young fish to hide in.