Man freed from bin after getting head stuck 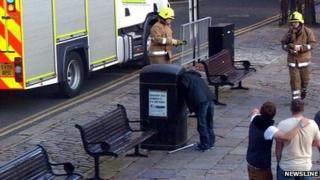 Newsline
The man has been freed by firefighters

Firefighters in Aberdeen were called to the rescue after a man got his head stuck in a public litter bin.

It isn't known how the man got his head trapped in the 4ft-high waste bin.

A spokesman for Grampian Fire and Rescue Service said the man was not injured.

He was taken to hospital for a check-up though.

Let's hope his friends don't find out what he's 'bin' up to!