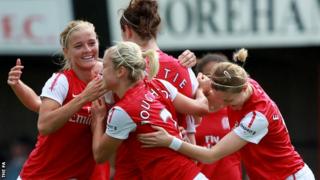 In fact, unbeaten Arsenal knew they had won the Women's Super League title before the game had even kicked off!

Second-placed Birmingham City needed to beat Bristol Academy earlier in the day but could only draw 2-2.

This is the 11th time the Gunners have been crowned champions of England in 12 years.

Arsenal boss, Laura Harvey said: "We're delighted to have won the league again and it's great to have done it at home."