Fish could be up to a quarter smaller by 2050 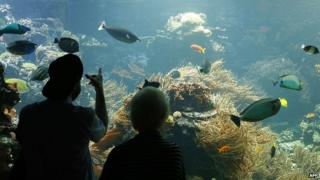 The fish on your dinner plate could be getting smaller.

Scientists from Canada think that cod, along with around 600 other types of fish, could shrink by up to a quarter by the year 2050.

They found that as oceans get warmer they hold less oxygen, which is needed for the fish to grow.

They think that if climate change continues to heat up the planet, the lack of oxygen could mean that fish stop growing as big as they are now.

The team also found that fish use up more oxygen when swimming in warmer water, which would mean there was even less around to help them grow.

Dr William Cheung who lead the project said: "The unexpectedly big effect that climate change could have on body size suggests that we may be missing a big piece of the puzzle of understanding climate change effects in the ocean."