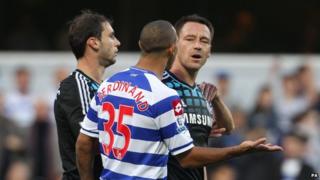 The Football Association, which runs football in England, has also fined him £220,000.

Terry has been found guilty of a charge of misconduct, following the game between the two teams last October.

The four match ban is half that given to Liverpool's Luis Suarez for using racist language last season.