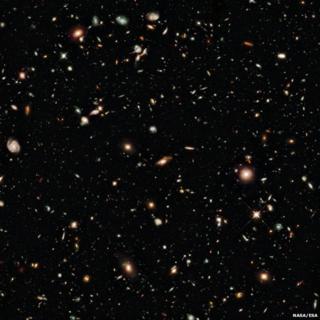 Nasa/Esa
The image took more than 500 hours to build

One of the most amazing pictures ever taken of the Universe has been captured by the Hubble Space Telescope.

It's been called the eXtreme Deep Field and captures a mass of galaxies stretching back to the time when stars first began to shine.

More than 10 years were spent making sure as many objects as possible could be captured.

The picture will help astronomers study the full history of galaxies and how they change over time.

Scientists say the oldest one may have existed just 450 million years after the birth of the Universe.

This remarkable image will be updated again when Hubble's successor goes into orbit. The James Webb Space Telescope is scheduled to launch in 2018.

This next-generation observatory's larger mirror and more sensitive infrared instruments will allow it to go deeper still, to witness the very first starlight in the Universe.