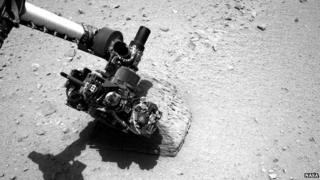 The robot pushed its high-tech arms against a rock to find out which elements it was made from.

It gave scientists an early chance to demonstrate the performance of the rover's special technology - a "hand lens" and X-ray spectrometer.

The mission is trying to find out whether life could be supported on Mars. 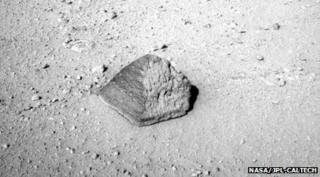 NASA/JPL-Caltech
The rock was not expected to be anything more than a standard lump of Martian basalt.

On Monday, Curiosity moved 42 metres, the furthest the robot has travelled since landing on the red planet seven weeks ago.

The vehicle is trying to get to a location that scientists have nicknamed Glenelg. Satellite images have shown that it's a junction between three types of geological terrain.

Once it gets to Glenelg Curiosity is likely to use one of its key arm tools - its drill - for the first time.