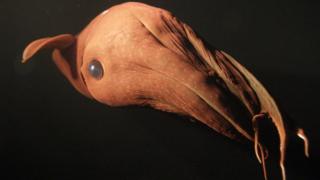 After decades and decades of research, scientists believe they've finally found out what vampire squids eat - and the news is pretty gross.

The findings come as a bit of a surprise, as it was thought they may eat live prey like their relative, the octopus.

The scientific name for what they eat is 'marine snow'.

In the past researchers have caught vampire squids in nets and tried to figure out what they ate by examining the contents of their stomachs.

However, the results have never been very clear, their stomachs typically containing bits and pieces of tiny, shrimp-like animals and lots of slimy goo.

But now with the use of new high definition video scientists have been able to monitor the animal's eating habits accurately. 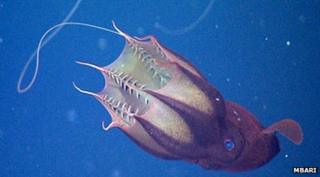 MBARI
Researchers did not find any bones in the squids' stomachs that would indicate they had captured live prey.

The vampire squid uses two thread-like special sensors to capture bits of debris that sink down from the ocean surface into the deep sea.

The debris is then covered in mucus and put in to its mouth.