Referee Mark Halsey complains to police after abuse from fans 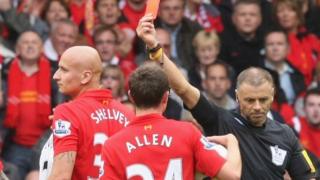 The referee from Liverpool's match with Manchester United has complained to the police after abuse from fans.

Some of the messages were very personal, referring to his recent recovery from a major illness.

The referees' association has backed his decision and Halsey says he'll speak to police later this week.

His decision to send Liverpool midfielder Jonjo Shelvey off and award Man U a controversial penalty drew criticism from Reds boss Brendan Rodgers.

He said: ""We could control our players' performance but what we can't control is decisions by the referee."

But hours later some Liverpool fans made several disturbing comments on the social networking site, prompting Halsey to take the matter further.

Halsey told BBC Sport: "I can confirm that my family have made a complaint to the police.

"I will be speaking to the police on Wednesday after I have returned from refereeing Southampton v Sheffield Wednesday."

A spokesman for them said: "We abhor any abuse of match officials... in stadia or outside of it.

"Our main concern is towards Mark and his family, and like with all match officials, there is a backroom team who are there for them."