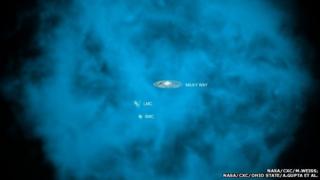 Our Milky Way galaxy is surrounded by an enormous halo of hot gas, Nasa astronomers have found.

It goes on for hundreds of thousands of light years - that's the time it'd take light to travel to the edge.

They think the temperature of the halo is between 1 and 2.5 million kelvins - a few hundred times hotter than the surface of the Sun!

Baryons are particles that make up most atoms found in the cosmos.

The number of particles that scientists have observed doesn't match the number there should be according to calculations.

But this latest discovery could account for some of those missing baryons.