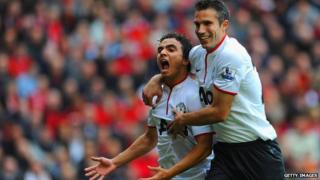 Liverpool were condemned to their worst start to a league season in 100 years after losing to Manchester United at Anfield.

The Reds had midfielder Jonjo Shelvey sent off for two a footed tackle on Jonny Evans jus before half time but then took the lead through Steven Gerrard.

United then hit back with a Rafael goal and a Robin Van Persie penalty.

The result leaves Liverpool in the bottom three with their lowest points haul at this stage of the season since 1911-1912.

Afterwards United manager Sir Alex Ferguson admitted his side were lucky to claim the victory. He said: "a win is a win", but conceded that his team's performance was "very poor".

Before the game kicked off the teams and fans paused to remember the Hillsborough disaster when 96 Liverpool fans lost their lives.

Luis Suarez and Patrice Evra also shook hands despite a previous feud between the pair.

In Sunday's other Premier League action Manchester City and Arsenal held each other to a 1-1 draw, Newcastle beat Norwich 1-0, and Tottenham beat QPR 2-1.