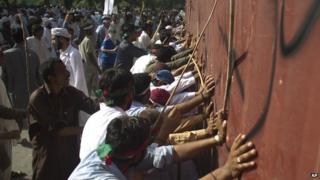 More violent protests have taken place in Pakistan over an anti-Islam film made in the US.

Ten people have been killed and lots of others hurt in cities, including Pakistan's capital, Islamabad.

Protesters there clashed with police after trying to get near the heavily guarded US embassy.

In the northern city of Peshawar, demonstrators set fire to two cinemas.

Protests have spread throughout Muslim countries over the film which ridicules Prophet Muhammad, Islam's holiest figure.

The Pakistan government had declared Friday a "special day of love" for the Prophet but that soon turned to violence as people filled the streets.

The film sparked the violence that led to the killing of the US ambassador and three diplomats in Libya earlier this month.

A magazine has also published cartoons of the Prophet Muhammad which has led to extra security measures in France.

The US President, Barack Obama, has paid for adverts on Pakistani TV that show him condemning the film.