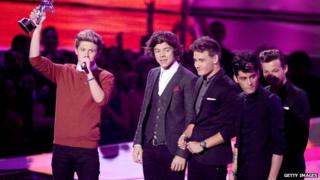 One Direction have brought forward the first radio play of their new single because it was leaked online.

The track called Live While We're Young was due to be premiered on 24 September but on Thursday a version appeared on several websites.

It was a low quality version of the song which didn't sound as good as the official version.

The band decided to let radio stations play the new single and uploaded the video to youtube.

A statement from the group on Thursday said: "We wanted our fans to see the video and hear the single in the proper way so we've moved the premiere to tonight.

"We're really excited about LWWY, we've worked really hard on it and we can't wait for everyone to see and hear it."

Live While We're Young is the first single from One Direction's new album called Take Me Home, which is released in November.