Man is charged with the murders of two police officers 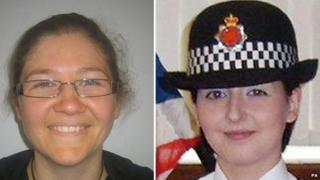 A man charged with the murders of two police officers and two other men has been remanded in custody.

PC Fiona Bone and her colleague PC Nicola Hughes suffered fatal injuries in a gun and grenade attack in Manchester, on Tuesday.

Dale Cregan is accused of their murder. He is also charged with murdering two other men in separate attacks earlier this year.

He appeared at Manchester Magistrates' court on Friday morning.

Despite Cregan's arrest police are still wanting anyone with more information to contact them.

Sir Peter Fahy, Chief Constable of Greater Manchester Police said: "The fact that we have charged someone does not mean this investigation is complete."

Tributes have been pouring in for the two women and on Thursday flowers were laid by Sir Peter Fahy at the scene where the officers were fatally injured.