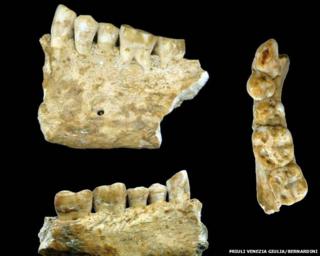 Scientists have discovered a pre-historic tooth believed to have the first known filling.

The tooth is from a fossilized 6500-year old human jawbone found 101 years ago in the European country of Slovenia.

It appears to come from a 24 to 30-year old, and have a filling made from beeswax, say Italian scientists.

Even though the fossil was found a century ago, the filling has only been spotted now because of X-ray equipment.

Scientist Claudio Tuniz said: "The jawbone remained in the museum for 101 years without anybody noticing anything strange."

But when they wanted to try out new X-ray imaging equipment, they used this fossil - and discovered unusual material attached to a tooth.

The scientists' detective work led them to discover the material was beeswax - natural wax which comes from bees.

It was filling a large crack and a cavity in the tooth. Radiocarbon dating of the wax and the tooth showed both to be around 6500 years old.

The researchers aren't sure if the filling was put in while the person was still alive, or after their death.

But they say this discovery will help them learn how pre-historic humans looked after their teeth.

The findings have been published on an online science website called PLOS One.