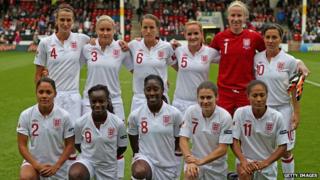 England overcame a tough Croatia side to secure a 3-0 victory and book their place at Euro 2013.

Hope Powell's side were frustrated for much of the first half by their defensive-minded visitors who they had beaten 6-0 in March.

Jill Scott made the most of one of the few chances in the opening 45 with a tap-in, before Eniola Aluko poked in to make it 2-0 soon after the break.

Captain Casey Stoney scored a third late in the match.

The result sees England leapfrog the Netherlands to qualify from their group in top spot, although the Dutch also reach the finals in Sweden as best runners-up.

"It is a relief to qualify automatically as it means we don't have to go through the danger of the play-offs," said coach Powell.

"In patches I thought we played very, very well. It has been a good week in terms of training and they transferred that on to the pitch."