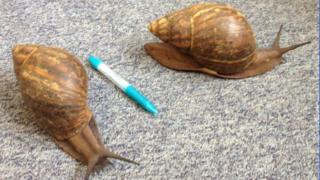 A man's been stopped from smuggling 36 giant snails into Scotland.

The were found in the suitcase of a Nigerian man who said he was bringing them into the country to eat.

The snails were found in his luggage after he took a flight from Amsterdam earlier this month.

The snails are about 15cm in length, with shells the size of a small human fist.

You need a special license to bring live animals into the country, which the man did not have.

The snails were seized and passed on to a rescue organisation.

"Our officers at Glasgow airport stopped these snails from entering Scotland, and possibly posing a risk to our native plants and wildlife."