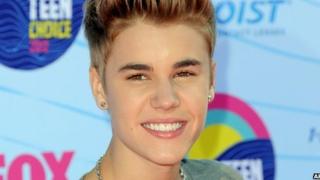 Justin Bieber is the world's top young musician according to a new list that ranks the most powerful artists under the age of 21.

The Biebster was ranked above One Direction in the list compiled by the American magazine Billboard.

He also beat off competition from Cher Lloyd to top the chart for the second year running.

The magazine said the 18-year-old "remains more powerful in the pop universe than ever".

One Direction came second in the list, having become one of the biggest groups in the US over the past year.

She was noted in the list for a busy year that has seen her release an album, create a fragrance and provide a voice for the animated film Hotel Transylvania.