Arsenal come from behind to beat Montpellier in France 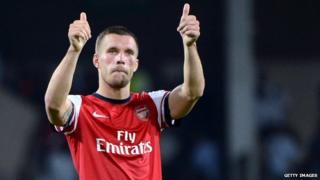 Arsenal came from a goal down to record an impressive 2-1 away win against Montpellier in the Champions League.

The French champions had taken the lead after Gunners captain Thomas Vermaelen conceded an early penalty.

But two goals in three first-half minutes turned the game around for Arsene Wenger's men.

Arsenal arrived in France with a great record, having never lost to Ligue 1 opposition in eight previous European matches.

So it was a bit of a surprise when Montpellier took the lead through a chipped penalty after just nine minutes.

However the Gunners quickly got back in the game after a sweeping passing move ended with Podolski sliding the ball beyond goalkeeper Geoffrey Jourdren and into the net from 12 yards.

Three minutes later and the away side were ahead, Gervinho prodding in a Carl Jenkinson cross.

The result leaves Arsenal in control of Group B, level on points with Schalke.