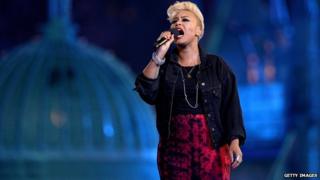 The nominations for this year's Mobo awards have been announced with Emeli Sande and Plan B leading the way with five nominations each.

Beyonce, Ne-Yo, Nicki Minaj, Rihanna, Kanye West and Jay Z have all been selected for the Best International Act.

The Mobos stand for Music of Black Origin and celebrate urban music in the UK.

Prizes will be handed out at the awards ceremony on 3 November at Liverpool's Echo Arena.