Badger cull to go ahead in Gloucestershire 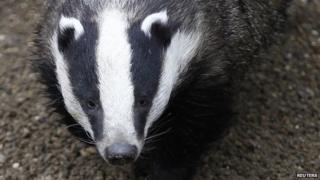 For the first time, farmers in England have been given a licence allowing them to shoot badgers.

It's to stop disease called Bovine Tuberculosis (TB) spreading from badgers to cows.

The new government plans mean the killing of badgers, called a cull, will start in Gloucestershire.

Campaigners including animal charity RSPB say that it would be better to give badgers medicines to stop TB from spreading.

Environment expert Prof Sir Robert Watson, who advised the government on its plans, said culling alone will not solve the problem.

At the moment there is not a vaccination that has been proved to work in stopping bovine TB.

Farmers still insist the controversial cull is necessary because without it, they say their cattle would die from the disease.

Up to 3,000 badgers could be killed during the cull, and many farmers will have to pay for it themselves.