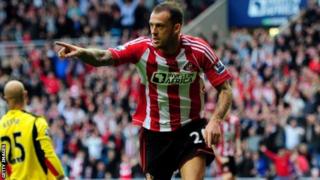 Why won't Scotland pick striker Steven Fletcher? That's the question lots of fans have been asking after a patchy start to the tartan army's World Cup qualifying campaign.

Sunderland's £14m man has a long running feud with manager Craig Levein but recently announced he was willing to make an international comeback if selected.

However it looks like his offer will be ignored by the Scotland boss, despite his side struggling to score goals in their opening two qualifiers.

Scotland drew their first game with Serbia 0-0, then managed a 1-1 draw with Macedonia with veteran forward Kenny Miller playing up front on his own.

He now plays Major League Soccer in America and many fans think Fletcher, who's had a great start to the Premier League season with Sunderland, is a much better option.

Fletcher has not been picked since he sent a text message to Levein saying he was unavailable for a friendly with Northern Ireland in February 2011. That came after he was left on the bench for Scotland's previous qualifying match.

Last October Levein said Fletcher would have to make the first move if he ever wanted to get back in the squad. Then in May of this year he said he was closing the door on the ex-Wolves hit-man because he'd waited too long for him to make a decision.

On Sunday Fletcher, who's scored once in eight games for Scotland, said on Twitter he would be willing to return if asked.

But BBC Scotland has learned that Levein will ignore those comments because Fletcher was given opportunities to make himself available in the past but refused to do so.