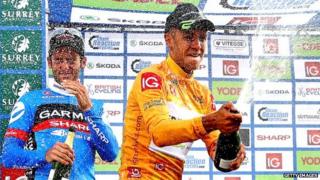 Jonathan Tiernan-Locke has become the first British rider to win the Tour of Britain for 19 years after Sunday's final stage.

Heading into the race Tiernan-Locke led by 18 seconds and crossed the finish line with the main group of riders, to claim an historic win.

The 27 year-old said: "It's fantastic. It has not really sunk in yet."

He added: "It was a tough day, a lot tougher than we thought. So I feel relief more than anything."

The riders covered 1,349.9 kilometres in a week of racing across the British Isles that kicked off in Ipswich, Suffolk and finished in Guildford, Kent.