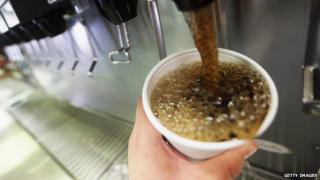 New York City has become the first place in the United States to ban the sale of supersize sugary drinks.

The new law will make it illegal to sell fizzy drinks in cups bigger than half a litre.

The city's Mayor, Michael Bloomberg, wanted to bring in the ban to tackle obesity but lots of people aren't happy about it.

One New York business owner said: "We are smart enough to make our own decisions about what to eat and drink."

Groups who are against the new law say they'll continue to fight against it being introduced.

Diet drinks and fruit juices aren't included in the ban so can still be sold in bigger sizes.

Restaurants who break the rules could be fined up to £120.