Nintendo Wii U will be released in the UK in November 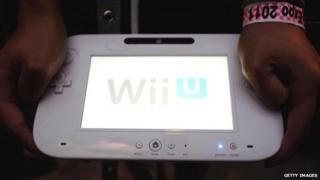 Nintendo has revealed it will release the new Wii U in the UK on 30 November.

There will be two versions available; a basic edition that'll cost around £210 and a premium version costing about £250.

The main difference between the two will be memory - with the premium version having more.

It's thought extra controllers will cost just over £100 each.

What is the Nintendo Wii U?

The big difference between the Wii and the Wii U is the controller.

Even though you play on a big screen like with an XBox or a PlayStation, the Wii U's controller has its own touchscreen in the middle.

The touchscreen will be used to carry out in-game tasks while the main action continues on the television.

You can still control the games by moving the new controller, but it also has a joystick and trigger buttons.

It's also got a camera that faces whoever is playing the game.