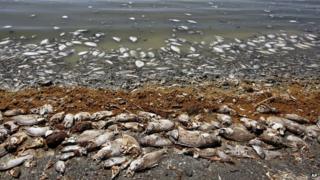 People in California are breathing a sigh of relief after discovering the source of a mystery stench.

On Sunday, thousands of Californians noticed a strong smell of rotten egg in the air but couldn't figure out where it was coming from.

Two days later, air investigators sniffed out the source of the problem - loads of dead fish in a lake in the south of the state.

The smell had reached as far as Los Angeles, 150 miles away.

It's thought a massive thunderstorm could have churned up smelly bacteria from the bottom of the lake, releasing the stench into the air where it became trapped by clouds.

A Californian official said: "It is highly unusual for odours to remain strong up to 150 miles from their source."

Massive fish die-offs are common in the Salton Sea lake, which is slowly dying from too much salt, but nobody can remember it ever smelling this bad.