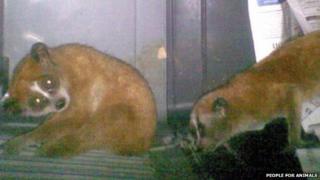 Two men have been arrested in India after trying to smuggle two lorises out of the country - in their underpants.

The men were changing planes at an airport in Delhi when custom officers became suspicious of their odd behaviour.

The creatures were taken to a local animal charity to be looked after.

The small primate has become a popular exotic pet over the past few years, which has led to more of the animals being taken from their natural habitat.

Lorises are small, nocturnal and carnivorous primates who live in tropical forest areas in South Asia.

But they've been taken from their natural habitat in such large numbers that they're now nearly extinct in the wild.

Conservationists are worried because once the creatures are caught they can't be returned to the wild as poachers remove their teeth.