Which word would you put in the dictionary? 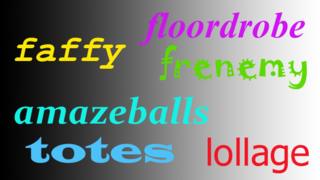 Can you tell your frenemy from your mate?

Well the Collins dictionary has added 86 new words to its online version - including frenemy, amazeballs and totes.

Publishers asked readers to submit new words which they think should be included.

They received over 4000 entries, and picked the ones which were mentioned most often and they thought would continue to be used.

Do you know these words?

Cyberbullying was included for the first time, as well as BBM, the Blackberry smart phone messenger and Facetime, which is an app on Apple's iPhone.

"Seatv - when you're sat down watching TV!"

"I would add these words which my Bezzies and I use all the time:

Mahussive -A combination of 'massive' and 'huge'

"Kapoosh - meaning amazing, wow, and ecstatic all in one word."

"I would put OMG because people say that a lot."